Nowadays, most of people in the United State of America either read a book or watch a movie at their free time, for entertainment purposes. Printed books and movies have some similarities and differences. Some people argue that books are better than movies and visa versa. However, this is a controversial issue that has been discussed a lot recently. In this article, I will compare and contrast movies and printed books. I will be discussing five main points: imagination, time consumption, entertainment value, ideas and media. I chose this topic because there has been a lot of controversy regarding movies and books.

Imagination plays a very important role when we speak of books and movies. Reading allows us to imagine the situation, environment, characters and their personality. Basically, movies are made from our imagination. Studies show that reading does improve a person’s creativity due to imagination: because you are using your brain while reading, your concentration and focus levels improve. On the other hand, movies leave viewers with little imagination, but they focus on visual effects. Researchers from Lancaster University propose that watching fantasy movies may help enrich the creativity in children.

A point that is worth noting is time consumption. A lot of people argue about this topic. Reading a book from cover to cover takes a lot of time; of course it depends on the book, the writing style and the wording. Many people enjoy reading books for leisure purposes. Veronis Suhler Stevenson (VSS), an American research company, made a survey, where it showed the estimated time spent on reading books (in a year) in the United States of America from 2002 to 2012 for those who are 18 years old and older. As you can see in the graph below, the average time spent is around 110 hours a year. 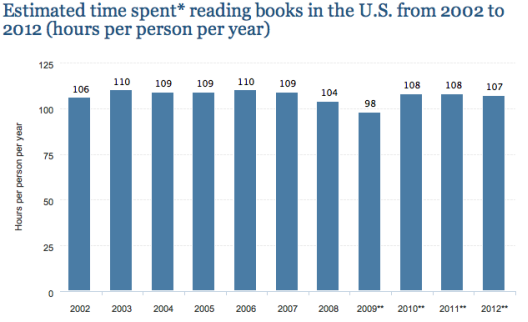 However, movies takes at most 4 hours of your time, such as the movie “Lord of the Rings 3”, but the average length of a movie is between 1.5 to 2 hours. A lot of people would rather watch a movie than read a book, claiming that it is not worth spending effort and time as you can watch the movie without requiring much effort from your side.

Furthermore, Entertainment Value is a part of a programme whose goal is to entertain or attract the audience’s attention. Books do that by enticing the reader by specific details that engage you. Some people find books more entertaining due to this reason.Â  Several people who both read books and watch movies claim that they were disappointed after seeing the movie as they had a higher expectations set up when they previously read the book . On the contrary, the movie experience is better shared with friends because movies are less imaginative, so it is easier to discuss the topic with your friends.

A final point to share is that even though books and movies are different entities, they have some similarities. For instance: the ideas of both topics share the same main idea. Also, both books and movies are considered as sources of media, as they are both sources of knowledge and are used for entertainment purposes. However, they differ in some points. For example: Books, as we all know, tend toward focusing on details while movies cut out the over detailed parts so that the viewer doesn’t feel bored while watching the movie. In addition, movies are considered as visual media while books is a typographic media.

In conclusion, we can’t conclude which media is better because this all depends on the individuals’ choice, personality and even age. Older people read books more than they watch movie, while the youth would rather watch a movie at their recreation time. Movies and Books have different ways presenting the story. However, they provide some similar prospects such as main ideas.